Laughter and applause erupted from the crowd as Riley, a black Labrador puppy, was sworn into office by Arapahoe County Sheriff Tyler Brown on Sept. 12 at the agency’s outdoor K-9 training …

“We really couldn’t do it without them,” Brown said. “The training facility that we’re standing on right now is provided by them and their wonderful donors, so we appreciate that.”

Brown previously said, during a presentation to Centennial City Council on Sept. 6, part of the $33,000 that was raised for Back the Blue K-9 Force during the “RexRun” event was used to purchase Riley.

Back the Blue K-9 Force announced Sept. 12 on its Facebook that Riley is the 13th dog the nonprofit has purchased.

Laughter and applause erupted from the crowd as Riley, a black Labrador puppy, was sworn into office by Arapahoe County Sheriff Tyler Brown on Sept. 12 at the agency’s outdoor K-9 training field in Centennial.

Riley, less than 10 weeks old, is Cherry Creek School District’s first therapy dog. He will be working, and living, with School Resource Officer Deputy Adam Nardi, who has worked at the agency for about 20 years.

Riley is the third therapy dog of Arapahoe County Sheriff’s Office, joining Rex and Zeke, who work in Littleton Public Schools. Nardi and Riley will work in all the Cherry Creek schools in unincorporated Arapahoe County and Centennial.

“The world’s a difficult place, and we saw that yesterday with the loss of the Arvada officer,” Brown said, referring to Dillon Michael Vakoff who was killed in line of duty Sept. 11.

“This brings joy even to deputies’ faces today, even on a difficult day like today when work is hard. And, you know, when school is difficult, it allows students the opportunity to stay engaged but also get some of that mental health support that they need,” Brown said. 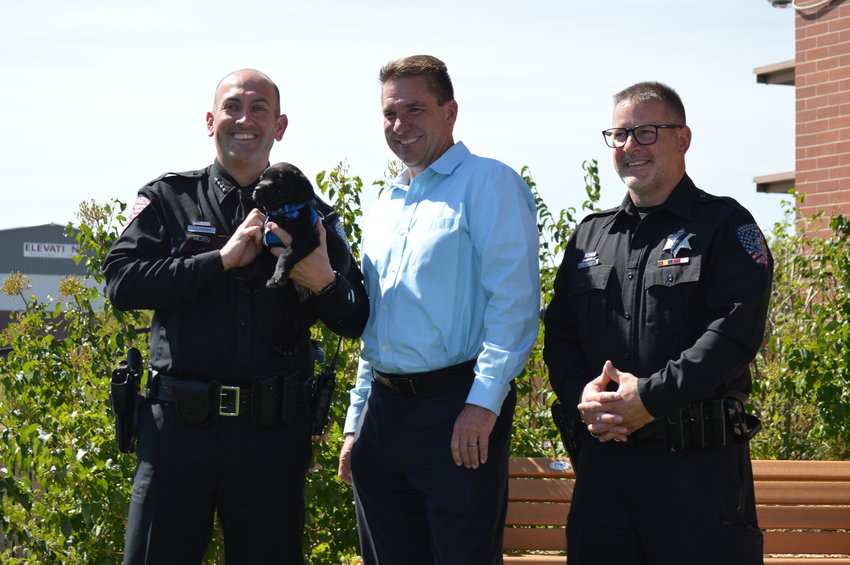 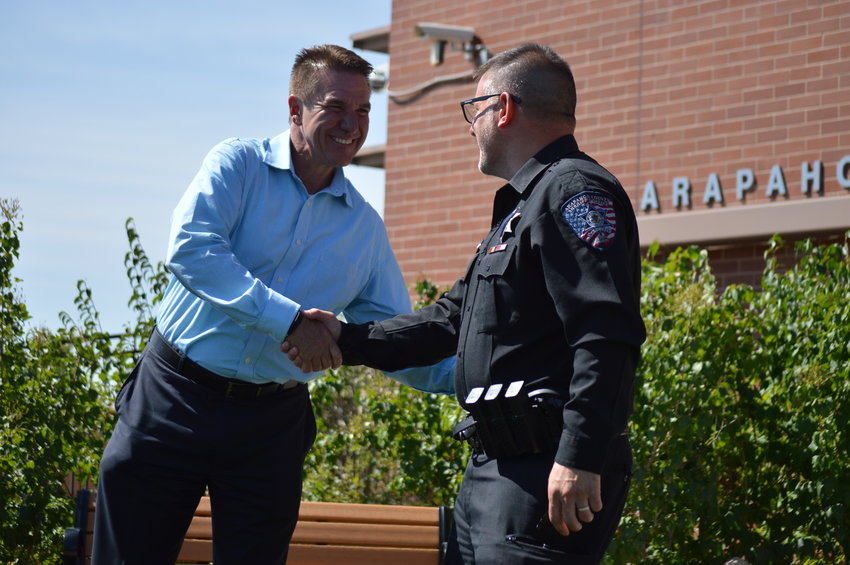 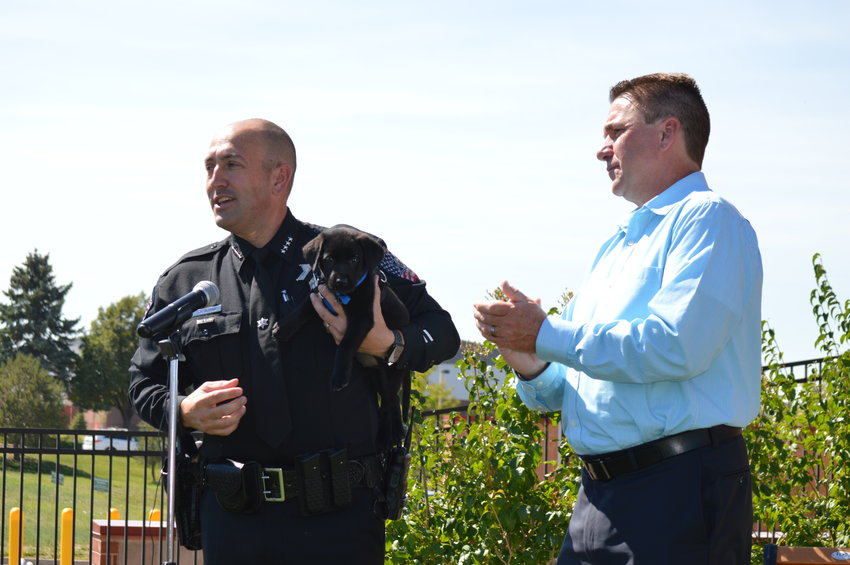 There had been talks for a while about adding a therapy dog to Cherry Creek schools, said Superintendent Christopher Smith.

Members of Arapahoe County Sheriff’s Office gave a presentation about what the program could look like for Cherry Creek and the successes the agency has seen in Littleton. From that presentation, two things stuck out to Smith and made him want to add the program, he said.

The first was the hands-on interaction the therapy dog program offers, such as visiting students in the classroom and offering reading programs.

“It truly is about building community, number one, in just a different way — to have our students just interact with law enforcement maybe in ways that they just normally wouldn’t, and in a non-threatening opportunity,” Smith said.

The second was the ability of the therapy dog to help calm people and de-escalate situations.

“If this is an opportunity that we can help our students navigate our buildings when they’re feeling stressed or anxious, it’s an actual no-brainer for us to have it,” Smith said.

Therapy dogs were also something students expressed wanting, he said.

Cherry Creek School District created a mental health task force, which was a group of students, community members, teachers and administrators who came together to brainstorm different ways the school district can support students, he said.

“As we lean into our core values about having a growth mindset, we can’t continue to do the same things that we’ve always done. So actually, the idea of a therapy dog came up from our students,” Smith said. 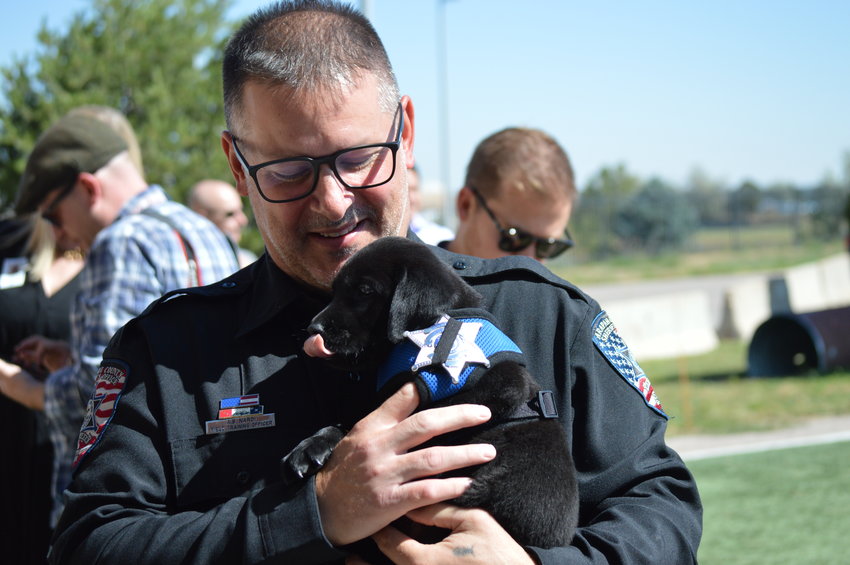 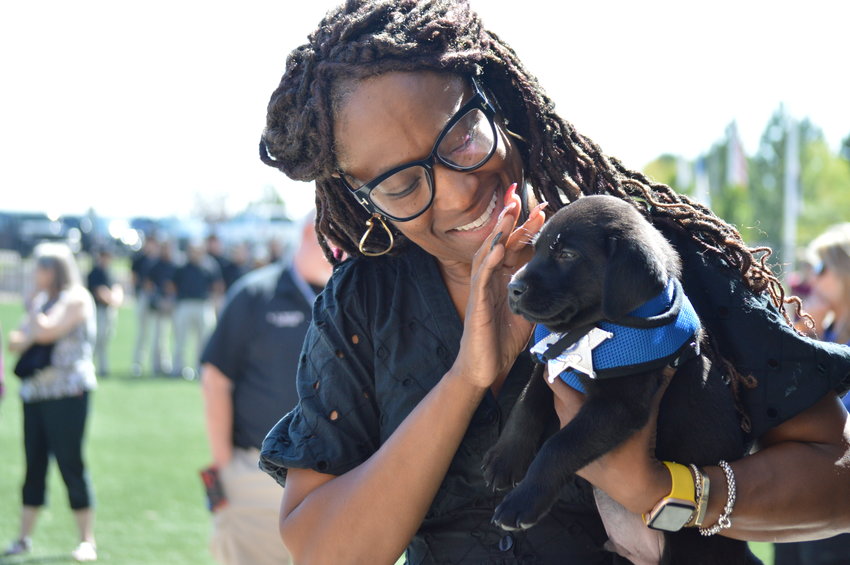 Angela Garland, a member of the Cherry Creek School District Board of Education, holding Riley on Sept. 12. 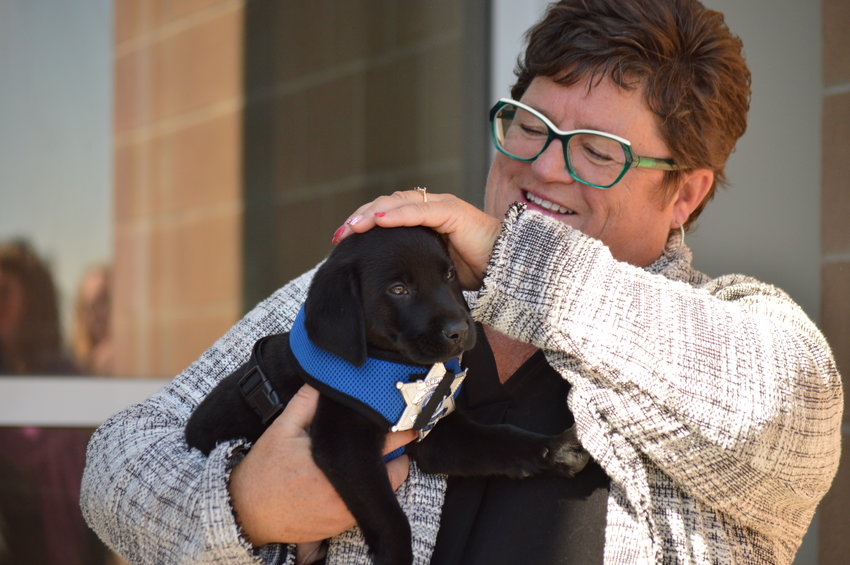 Kelly Bates, the president of the Cherry Creek School District Board of Education, holding Riley on Sept. 12. 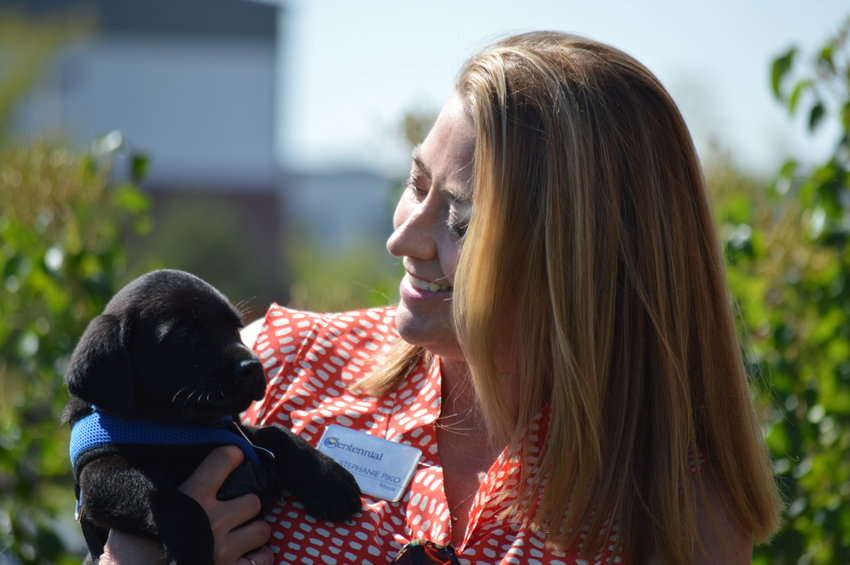 Connecting with students, especially those who may not want to talk to a law enforcement officer, was part of the reason Nardi wanted to take on the responsibility of being Riley’s handler.

Nardi has worked as a school resource officer for about four years, and it’s the best job there is, he said.

Part of the reason he became a school resource officer was because in 2016, he responded to a call, and it turned out a young Cherry Creek student had been murdered, he said.

“I never wanted to see a kid like that again. I want to see kids happy,” Nardi said.

He chose the name Riley in honor of that student, he said.

“I just think about this kid quite often still, and I just thought it would be just a great way to honor that little boy, to name my dog after him,” Nardi said.

Nardi and Riley wasted no time getting to work. After the swearing-in ceremony, they visited Dry Creek Elementary School, bringing smiles to students’ faces.

“This is exciting,” Smith said. “I hope it’s the continuation of a great partnership and the first of other ways that we can think how we work collectively together to help support students.”