Making the education system equitable is no easy feat, but education leaders across Colorado continue to push for positive change and share the lessons they’ve learned in hopes of creating a …

Making the education system equitable is no easy feat, but education leaders across Colorado continue to push for positive change and share the lessons they’ve learned in hopes of creating a more just system for future generations.

The panel was part of a series, “Changing the Legacy of Race and Ethnicity — Conversations for One America,” presented by the nonprofit Colorado Humanities, one of 56 humanities councils across the U.S. that receive funding from the National Endowment of the Humanities.

“Each panelist brings a very specific background and skill set, and they all work in different sectors of education,” said LaNaya Butler, the conversations programs coordinator at Colorado Humanities. “I feel that everyone (is) working to fix issues in their respective areas.”

The hour-long conversation, moderated by Executive Director Janiece Mackey of the nonprofit Young Aspiring Americans for Social and Political Activism (YAASPA), highlighted inequities in the education system and the methods — and need — for change. 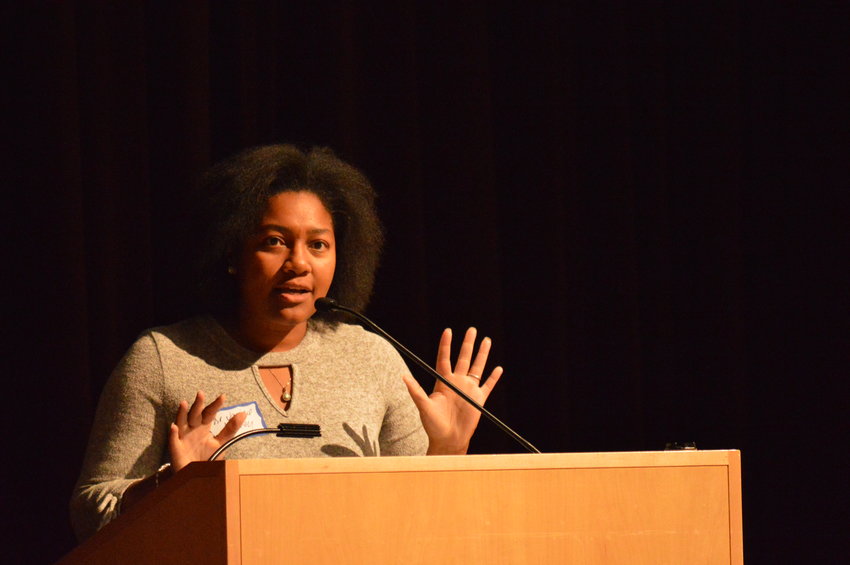 Janiece Mackey, the co-founder and executive director of Young Aspiring Americans for Social and Political Activism, moderated the Nov. 9 panel.

What drew the panelists to education

One of the reasons Rosanne Fulton, the director of the Center for Urban Education at the University of Northern Colorado, was drawn to a career in education was because she grew up very poor, and in the classroom, she found there were opportunities for people.

Tim Hernández, a teacher who gained media attention earlier this year when his contract was not renewed at Denver’s North High School, grew up in the kinship foster care system in Colorado, going to seven schools in seven years.

As a young person, he realized education is one of the only sustainable systems for people who “exist in systems that are designed to be unsustainable for them.”

The conversations that Tracie Trinidad, the director of policy and partnerships for the nonprofit YAASPA, had with her parents about the injustice they received from their teachers brought her to the field, wanting to ensure no other students endure the racism her parents felt.

Natalie Lewis, the vice president of leader development at DSST Public Schools, was pulled by a desire to help her community and teach young people the legacies they come from, and not the stories they are often told in schools. 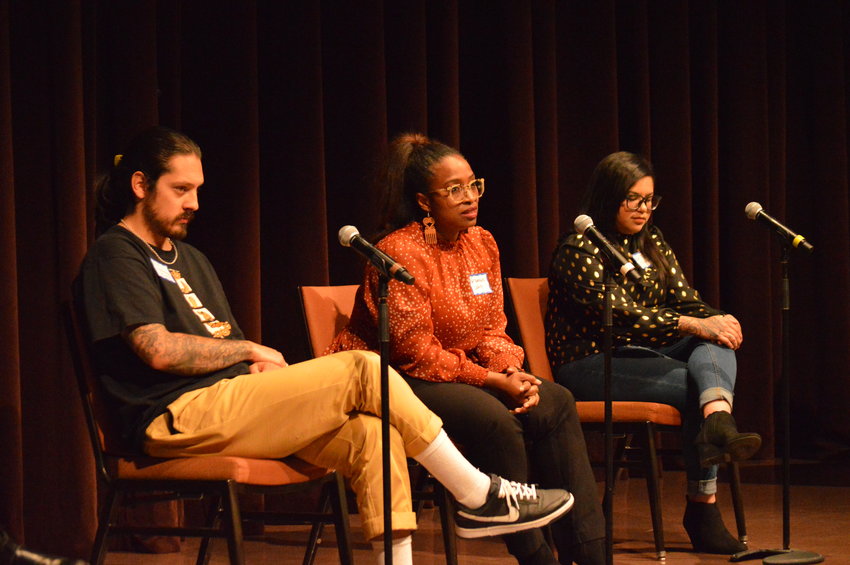 From left: Tim Hernández, Natalie Lewis and Tracie Trinidad were three of the four panelists at the Nov. 9 event.

The value of love

When asked what values they bring to education, Lewis said a belief in leadership and love.

“I think the charge in education is to ensure that all know that love exists across and within different communities,” Lewis said.

Trinidad reflected on how she displays love, saying, “It’s being humble and knowing that you don’t know everything, and that you have so much to learn from the young people.”

Sometimes in the classroom setting, educators feel they need to have power over youth, she said.

“And I think through honoring youths’ lived experience and the knowledge that they already bring to the classroom is a way we can show love and the way we can really change what education looks like,” Trinidad said.

Fulton said when people develop deeper relationships with others, they develop more love. And with that comes more energy to think outside the box to support their growth and development.

“My core values are love and compassion and sensitivity,” she said. “And, you know, spending the energy that it takes to get to know people as individuals, because when you do that, then the support that we can provide to people can be very transformational.”

Love is foundational, Hernández said, and part of that foundation is also urgency — something he brings.

“I don’t think that we have the time to wait,” he said, explaining if people are unhappy with the education system, they have to take action to change it.

“As Paulo Freire writes, school does one of two things — it either upholds a just society, or it dismantles an unjust one. I don’t think anybody in this room tonight believes that we exist in a just society,” he said. 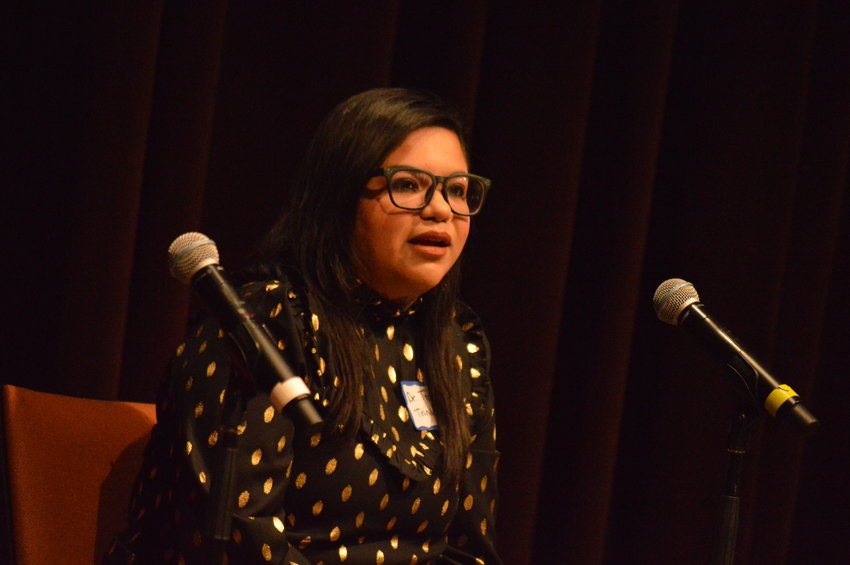 Tracie Trinidad, the director of policy and partnerships for the nonprofit YAASPA, speaking during the Nov. 9 panel.

What should be removed from the schooling experience?

Hernández has a long list of what he would like to do away with in the education system, including standardized testing and standardized education.

Ultimately, he wants to remove “the foundational nature of education as separate from community” and “anything that is not determined by a community,” he said.

“If families and students do not want something in their education, it shouldn’t be there,” he said.

He understands people’s affinity for national standards and making sure that students can perform well, clarifying he’s not opposed to that. Standards are part of offering students shared common knowledge, and educators have to get everybody on the same page, he said.

“But to place the idea that standardized education and the needs and wants of a community are diametrically opposed is to say that communities cannot thrive academically on their own, separate from the systems that we exist within,” he said. “And I don’t think that’s the reality.”

Building off Hernández’s points, Trinidad asked who are the “standard” and “traditional” students.

“I think, really, communities need to create their own schooling, hire their own educators and go off a curriculum that they know will support their students in being the best person that they can be,” Trinidad said.

The current education system has taught people to be more compliant than to be critical thinkers, she said.

“That’s why schooling right now is a microcosm of our larger society. It’s a battleground, and we see this as we’re voting and passing legislation about what can and cannot be taught in schools,” she said.

Expectations in the education system are one-sided, as they are determined outside of students and families, Lewis said. Moving forward, it’s important to engage families and students as part of the conversation of what the expectations should be. 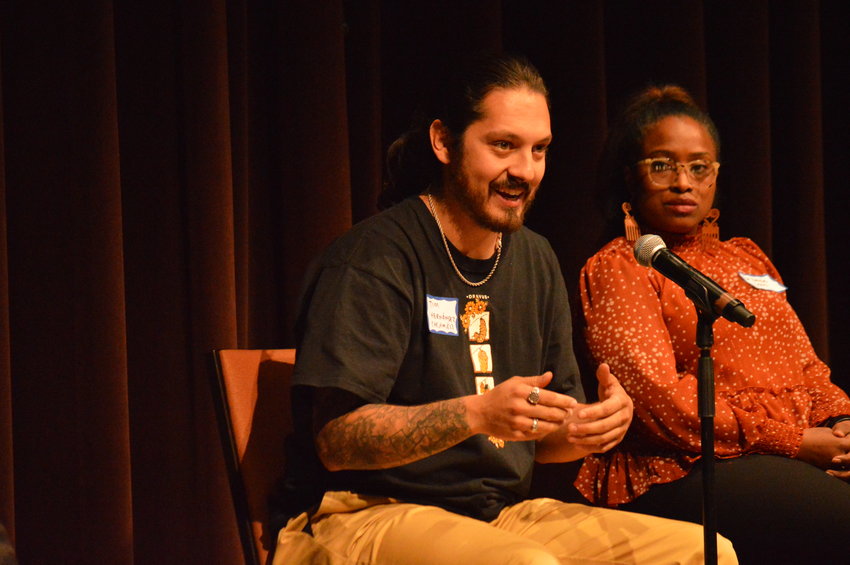 Tim Hernández, a teacher, was one of the panelists at the Nov. 9 event.

Fulton would remove anything in schools that does not fall under the umbrella of cultural responsiveness, which she said involves teachers forming relationships with families and making decisions together.

“I just think it’s very important for everybody to have their own definition of cultural responsiveness and then to act on that on a daily basis,” Fulton said.

“Culturally responsive education affirms the idea that culture and education are two separate entities that must respond to each other,” Hernández said. “The culture is already there. Our job is not to respond to it. Our job is to sustain it.”

Students deserve to have their cultures represented in the classroom, he said, and schools should actively sustain a student’s culture by centering cultural knowledge and expressions. Otherwise, the culture students walk into the classroom with could disappear.

Feeling like their culture is not being sustained is partially what drives educators of color away, Lewis said.

According to a 2021 article by the Pew Research Center, white teachers outnumber educators of other races and ethnicities by a wide margin, with 79% of U.S. public school teachers identifying as white.

“If 80% of teachers are white, those aren’t just racist conditions of teaching. Those are colonial conditions, too,” Hernández said. “It’s very important that if we exist in racist and colonial systems of education, that we have to be very honest with that — about what those systems are — with our students.”

In 2019, The Denver Post reported more than half of Denver’s public schools are as segregated as they were in the late 1960s.

“We have the power within us to demand something better from what we’re existing in,” Hernández said. “The question is not what do we want to do, it’s how long are we willing to wait to get there?”

What gives Trinidad hope is seeing how the resistance of young people has evolved, saying she’s interviewed young people who have challenged the textbooks being used in the classroom and held meetings with school leaders about what they’d like to see in schools.

“I think that’s what’s given me hope, because they, too, will be leaders and educators,” she said.