When somebody commits a hate crime, that really destroys a community sense of safety, belonging, inclusion, and so that has a ripple effect… and it affects quality of life for all Coloradans.”
Jeremy Shaver, Anti-Defamation League’s Mountain States Regional Office (ADL)
Nina Joss
njoss@coloradocommunitymedia.com

From 2018 to 2020, reported incidents of hate crimes in Colorado more than doubled, according to statistics from the FBI.

These numbers also increased nationwide, but in Colorado the rate is higher. Over two years, the state's cases increased by about 132%, compared to the the national average of 17%, according to data from the FBI.

Although there is no way to definitively prove the reason for these trends and no clear solution to the problem, law enforcement agencies, legal offices and organizations across the Front Range are taking steps to better care for victims and stand against bias-motivated crimes and incidents. 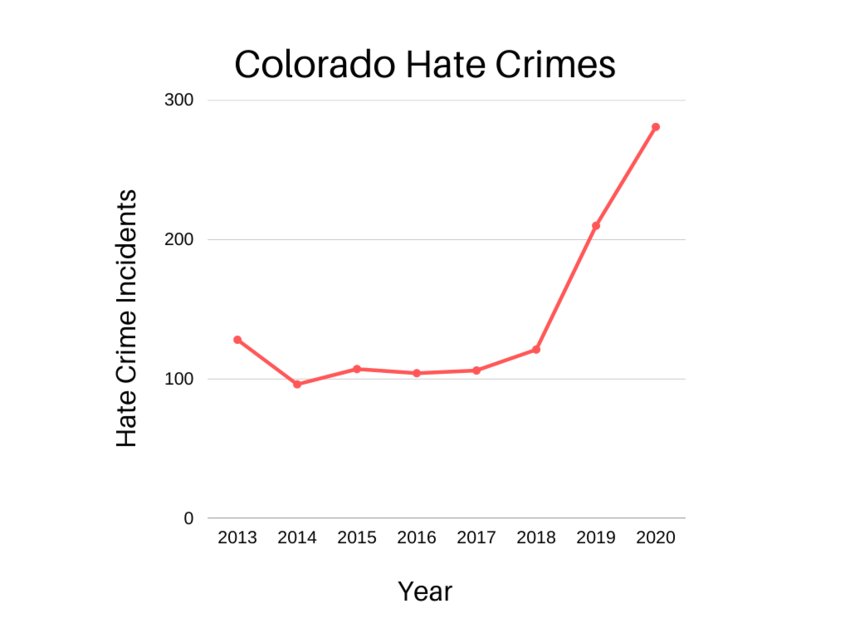 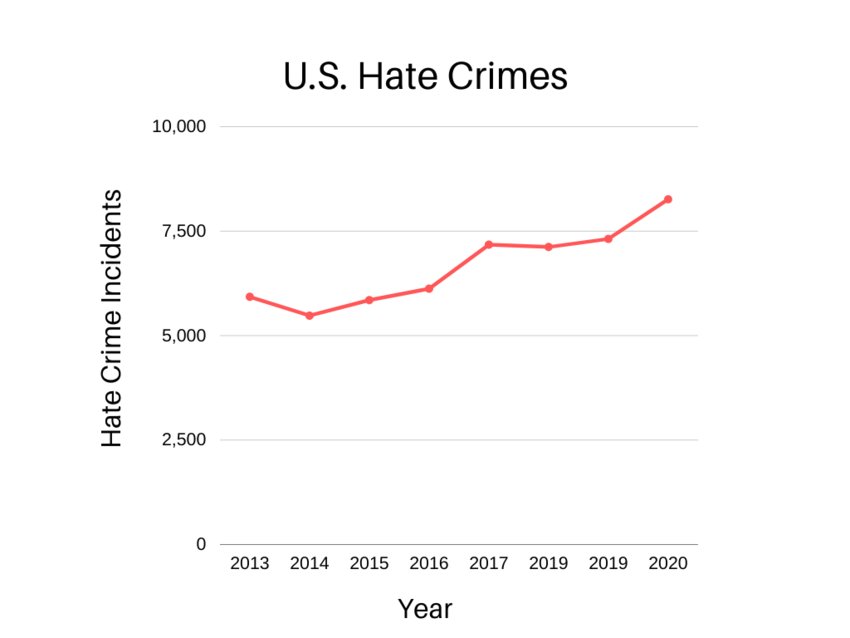 As defined by Colorado state law, a bias-motivated crime, also known as a hate crime, is a criminal offense committed “with the intent to intimidate or harass another person, in whole or in part, because of that person's actual or perceived race, color, religion, ancestry, national origin, physical or mental disability, or sexual orientation.”

Hate crimes can range from acts of vandalism to shootings, such as that which occurred on Nov. 19 at Club Q, an LGBTQ+ club in Colorado Springs where a gunman killed five people and wounded 17. The accused gunman is facing murder and hate crime charges.

In Colorado, most reported hate crimes arise from bias against a victim’s real or perceived race, ethnicity or ancestry, according to Jeremy Shaver, senior associate regional director at the Anti-Defamation League’s Mountain States Regional Office (ADL). The second most frequent category of hate crimes are those that target individuals based on sexual orientation, he said.

Several localities across the Front Range reflect the state’s increase in hate crimes, but on a smaller and less consistent scale, according to data from the Colorado Bureau of Investigation, or CBI. 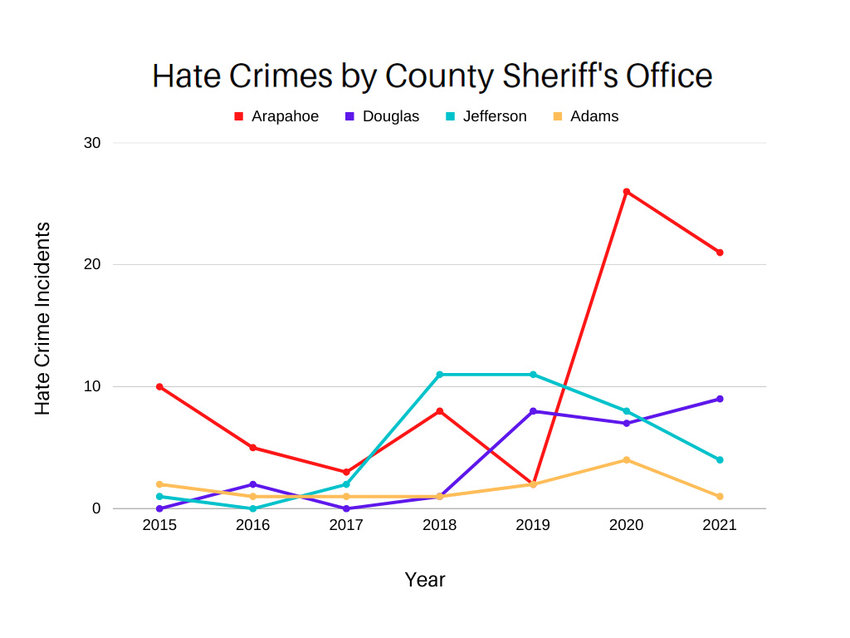 Data from the Colorado Bureau of Investigation. Graph by Nina Joss.

According to a 2022 survey from Hate Free Colorado, a coalition of community partners dedicated to countering hate crimes in the state, the true number of hate crimes and bias-motivated incidents is significantly higher than what official government data represents.

“I think the challenge is that we know many of the frequently targeted populations in Colorado are those that also have the lowest levels of trust and confidence in law enforcement right now,” Shaver said. “And so … most of these cases end up going unreported.”

The survey found that almost 3 in 10 Colorado adults have experienced a hate crime or bias-motivated incident in the last five years. Additionally, only 18% of respondents in that category said they reported the event to the police.

The underreporting of hate crimes is a large concern for some law enforcement officials, including Arapahoe County Sheriff Tyler Brown, who was recently reelected.

To encourage more trust in reporting, Brown said his office is striving to become more diverse and reflective of the communities it serves.

He also noted a program that trains LGBTQ+ staff members within his office to be community liaisons, with a goal of creating spaces where LQBTQ+ individuals feel safer.

“It gives people an outlet to be able to express their concerns to somebody from their community and allows them the opportunity to talk to somebody that might have some similar occurrences that they've had in their life,” Brown said.

The Golden Police Department also has an LGBTQ+ liaison, according to Police Chief Joe Harvey.

Shaver said it’s important to think of alternate ways for victims to report bias-motivated incidents without needing to interact with the police.

“One thing that the Hate Free Colorado coalition is recommending is that the state of Colorado and local communities look at establishing hate crime hotlines … It would most likely be a victim advocate or a social worker or somebody else who would reach back out to (the victim),” he said. “It would be one way to make a report that's not an immediate call to law enforcement.”

Over the next year, Hate Free Colorado is hoping to educate community organizations that serve frequently targeted populations to help them better respond to calls that come into their agencies, Shaver said.

Why are hate crimes increasing?

Joel Zink, a hate crimes prosecutor at the Office of the District Attorney for Arapahoe, Douglas, Elbert and Lincoln counties, said a potential factor in the rise of hate crimes is the internet’s role in radicalizing people.

“Prior to the internet, folks who might have had some of these extremist ideas would be geographically isolated,” he said. “But with the rise of the internet, folks have instant access to these online echo chambers … where they can find like-minded people and bounce around these really radical ideas.”

Shaver said legislation, such as that which eliminates LGBTQ+ topics from school curriculums, also promotes harm against communities.

“We also need to see an end to legislation and rhetoric that continues to further harm against LGBTQ people,” he said.

Some say the increase in hate crime numbers could reflect something positive: a better understanding and recognition of hate crimes by law enforcement officers.

“I do think that at least in our jurisdiction … a small part of this is attributable to training that we're doing with law enforcement to identify these crimes earlier on,” Zink said, adding that he leads a four-hour training for new deputies at the Arapahoe County Sheriff’s Office.

Incoming law enforcement officers in Colorado are required to have bias-motivated crimes training, according to Shaver.

Training programs such as those through the Matthew Shepard Foundation, Hate Free Colorado and the Anti-Defamation League teach prosecutors, district attorneys and law enforcement officers across the state to better conduct hate crime investigations, Shaver said.

A 2021 change in Colorado law that expanded the definition of bias-motivated crimes may also contribute to recent rising numbers, according to previous reporting by Colorado Community Media.

Prosecutors use bias indicators to determine whether bias was a motivating factor in a criminal offense.

“(Bias indicators) would include things like the defendant’s own words, prior cases and behaviors and the nature and timing of the conduct in question, among other things,” Zink said.

King said prosecutors may also analyze a suspect’s social media activity and social connections to look for signals of bias.

In addition to learning how to recognize bias in a suspect, participants in hate crimes training programs learn how to address their own personal bias.

“We believe bias is universal — it's not unique to law enforcement agencies — but we think it's really important to discuss addressing bias in responding to these types of cases,” Shaver said.

Outside of hate crime-specific training, many law enforcement agencies, such as the Golden Police Department, implement regular anti-bias training for their departments.

“We not only want to train our officers how to go in and handle these (cases), but we also want to eliminate, mitigate, remove biases even from our own perspectives and how we go about doing our job and making sure that everybody feels that they've been treated with dignity and respect and compassion and empathy, that they've been treated fair and impartial,” Harvey said.

As law enforcement departments across the Front Range take steps to mitigate the frequency and impact of hate crimes, some acknowledge the emotional numbness that can come from facing the constant news of these incidents.

“Unfortunately, (hate crimes and mass shooting events) have become a common occurrence nationwide,” said Darren Weekly, who was recently elected as Douglas County Sheriff. “The problem is, is I think we as a society are becoming numb to the violence … It's a sad state of affairs for our nation.”

But even as events like this occur more frequently, Shaver said it is important to continue to recognize the impact of hate crimes on victims and communities, and work to fight against them.

“They not only impact the individual who's been targeted or those who share that individual's identity, but they have a greater social impact,” he said. “When somebody commits a hate crime, that really destroys a community sense of safety, belonging, inclusion, and so that has a ripple effect … and it affects quality of life for all Coloradans.”