Danielle SeeWalker is an artist, author and activist

Whether it be painting captivating murals on a high school’s cafeteria wall or decorating the decks of skateboards, the versatile artwork Danielle SeeWalker creates is representative of what …

Danielle SeeWalker is an artist, author and activist

Whether it be painting captivating murals on a high school’s cafeteria wall or decorating the decks of skateboards, the versatile artwork Danielle SeeWalker creates is representative of what she wishes she had seen growing up as a Native person.

SeeWalker, a Denver resident, is Húŋkpapȟa Lakȟóta, which is the band that stems from Chief Sitting Bull, she said. She is a citizen of the Standing Rock Sioux Tribe in North Dakota.

The media representations of Native people that SeeWalker saw as a child, often depicting derogatory images, made her feel ashamed of her identity, she said.

Now, she’s working to change the narrative through her work as an artist, author and activist.

She recently collaborated with Arapahoe Libraries as part of the libraries’ featured artists program, displaying some of her artwork in the Koelbel Library in Centennial for the month of November, which is Native American Heritage Month.

To celebrate, the library hosted an opening reception at Koelbel Library in early November, attracting a large group of attendees to view SeeWalker’s artwork and hear about her journey.

“The Arapahoe Libraries’ Featured Artists program showcases the work of a local artist who uses their art to shed light on diverse communities, discuss history and social justice, and spark important community conversations,” Dumville said. “Our featured artist, Danielle SeeWalker, she exemplifies all of these things.” 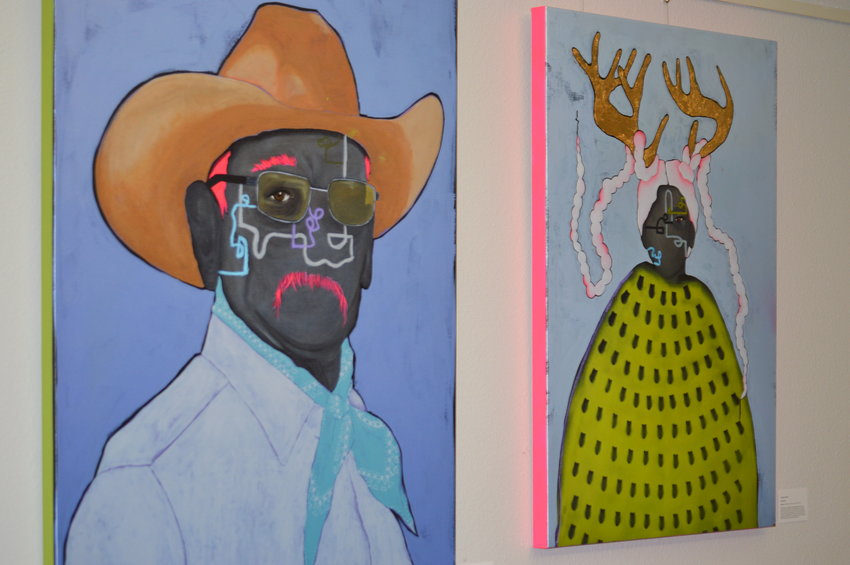 The power of imagery

Growing up, SeeWalker split her time between the Standing Rock Reservation and Bismarck, North Dakota, where she went to school.

It was a conservative area and there wasn’t much diversity of people other than Native people and white people, SeeWalker said. At her school, she was often the only Native child in class.

“Kids would put gum in my hair. They’d call me Medusa. They would say, ‘You’re dirty. Your parents are probably drunks,’” she said. “These are the things that I constantly had to face, these microaggressions, growing up.”

When November came at her school, students would have to make headdresses to wear during the school’s Thanksgiving celebrations.

“My family taught me the truth about Thanksgiving, and that it wasn’t something to be celebrated. It was very, very hard for our people — for Native people,” she said.

“These are the things that I had to deal with and had a big effect on me, and a lot of children my age and a lot of people my age,” she said. “Made me feel like I was stupid and … very dehumanized at times.”

Some people don’t understand the harm of something like a mascot of a Native person or a non-Native person wearing a headdress, SeeWalker said, explaining she’s heard people say they are celebrating the culture.

“But would you dress up in blackface and act this way?” she said. “We all know that you wouldn’t. So why is this OK?”

Seeing these representations of Native people made her feel very ashamed as a child.

“Today, we’re so lucky that kids have that opportunity to have dolls, and see public art, and read about those themselves, and have representation of who they are,” she said. “That’s so important, and I wish I would’ve had that.” 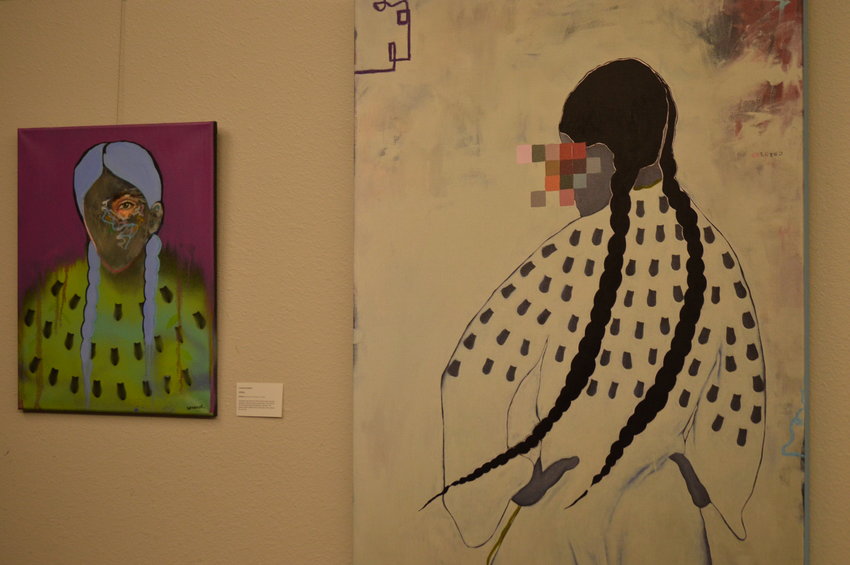 To cope with her dysfunctional, traumatic childhood, SeeWalker turned to creating art.

“My dad was an artist,” she said. “I come from a very talented family. All self-taught.”

Around the time SeeWalker was entering high school, she moved to Nebraska with her mom for a short period, and then to Philadelphia with her mom.

Moving from a small town in North Dakota to Philadelphia was a shock, she said. She recalled going to the Philadelphia Art Museum and seeing art in person that she’d only previously seen in books.

“I remember just crying, thinking, ‘Oh my gosh, I’m in front of a painting,’” she said. “It was so touching for me to be able to leave that bubble and sort of experience a new life.”

A more recent artistic endeavor has been creating murals, which she started doing in 2020.

“I was invited by one of my friends to do a mural. They were starting a mural festival called Babe Walls,” she said. “Babe Walls is an all female, non-binary mural festival that was formed in 2020 and it was by invite only.”

Although she felt uncertain about how to approach creating a mural, she ended up helping paint an entire house and soon began looking for more opportunities, she said.

Since then, she’s done murals for the Denver Indian Center, at an Airbnb location, in the cafeteria of North High School in Denver, and on walls in the RiNo Art District, often depicting Native people or aspects of Native culture.

“A lot of the things I do is because of what I wish I had at one point,” she said about her artwork.

This year, at SeeWalker’s suggestion, Babe Walls held its mural festival at the Standing Rock Reservation.

“There’s so much talent on the reservation, but zero resources,” she said, explaining she wanted to give back to the artists there.

“It’s by far probably one of the most proud projects that I’ve ever gotten to do,” she said.

She said witnessing the cultural exchange between the artists was mind-blowing.

“That was one of the highlights of my life,” she said.

SeeWalker said she wishes she could go back and tell her younger self that one day she will be proud of who she is.

“As I’m painting, or creating, or writing, or talking, I think about my ancestors and how they fought so hard for me to be here. I’m their wildest dreams coming true,” she said. “I shouldn’t even be here.”

“That’s why I say I’m my ancestors’ wildest dreams, because I was born with all these privileges that everybody else has. And I’m, sort of, now thought of as human,” she said.

With a desire to show people the beauty and resilience of Native culture and people, SeeWalker and one of her best friends, a professional photographer, decided to combine their talents to tell those stories.

Thus began the Red Road Project, a photo and film documentary project that started in 2013.

“We just started talking to people, and documenting them, and started telling the stories of these people and giving (an) accurate portrayal of what Native people look like today and how we are,” she said. “Showing that we are successful, contributing members of society in our communities.” 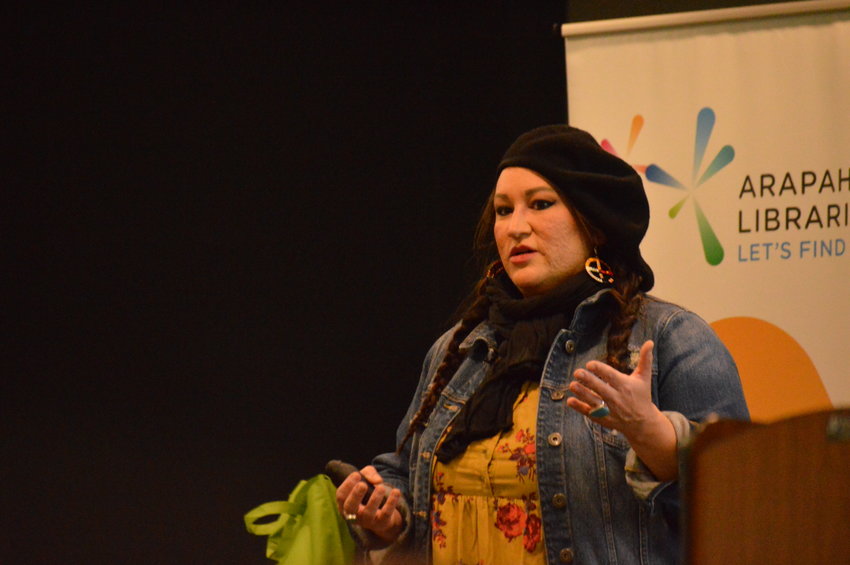 Danielle SeeWalker speaking to a crowd of attendees at Koelbel Library on Nov. 10.

Currently, SeeWalker is researching the Indian Relocation Act in the 1950s and 1960s when the government enticed Native people to move off reservations and come to cities like Denver, she said.

She also documents Native traditions and ceremonies, the connection people have to the land and stories from Native elders.

A lot of people will lump together all Native people, she said, but there are more than 570 different tribes that are unique to one another.

“Learning from my counterparts and peers in different tribes is so — it’s so important, and enlightening and healing for my own identity,” she said.

In 2020, the Red Road Project work came to a halt as travel restrictions went into place, she said. A book publisher reached out to her and asked if she’d be interested in writing something on a Native topic.

“I had a lot of time to reflect on a lot of learnings from the past decade, and I had the time to sit at home and write,” she said, explaining her book stemmed from her work with the project.

Her book, “Still Here: A Past to Present Insight of Native American People and Culture,” was published in 2020 and is currently in Arapahoe Libraries’ collection.

Shortly after moving to Colorado in 2018, SeeWalker, whose day job is working in business for a Fortune 500 company, applied to the Denver American Indian Commission.

The commission is a group which advocates on behalf of Denver’s American Indian community, the city’s website states, and for the past two years, SeeWalker has served as the co-chair of it.

She loves being a part of it and said it puts her in a position to participate in legislative efforts, such as helping get Senate Bill 22-150 passed this past summer. 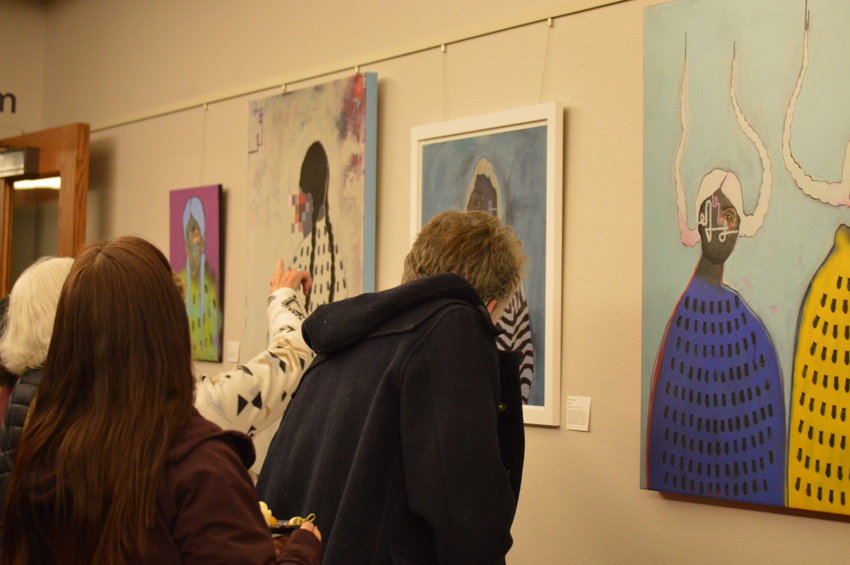 In her work to create accurate and insightful representations of Native people, SeeWalker welcomes questions from others.

“I want people to feel like they can ask questions in a safe environment,” she said, explaining one of her favorite parts of the event was engaging with people. “Because if we don’t, and we’re not talking about it, then that’s a form of erasure.”

Ellen Theis, a Highlands Ranch resident, said she has always been interested in Native American culture and art of all forms.

Wanting to get out of the house and get inspired, she decided to attend the event after learning about it through Arapahoe Libraries’ newsletter.

Theis described the event as wonderful and inspiring, saying SeeWalker’s artwork was beautiful. She also learned a lot from it, she said.

“Especially in today’s climate, we really need to be understanding where people are coming from,” she said. “I think it’s just a really great opportunity to come and learn.”

Those interested in learning more about SeeWalker’s work can visit SeeWalker.com.